Annual General Meeting and Annual Forum 2022 Emerging through the Crisis

Annual General Meeting and Annual Forum 2022 – Emerging through the Crisis

The Annual General Meeting (AGM) and Annual Forum of the IQSSL was held respectively on 02nd and 03rd of September 2022.

The governing council of the IQSSL made the decision to conduct the AGM as a hybrid event by utilizing technology to make it easier for the participants, despite the difficulties that were presented by the country's current situation and the spread of COVID-19. Members of the governing council, and the majority of senior members and young members who were to take "oaths" were physically at the OPA auditorium premises while others joined through the Zoom meeting platform. This setting facilitated IQSSL members who are settled abroad to also join the AGM.

The annual forum on the theme of "Emerging through the Crisis," which is a topic that is both topical and significant at the present moment, was conducted fully as a virtual meeting via the Zoom meeting platform since it allowed interested members from all around the globe to take part.

Dr. Indrajith Coomaraswamy, the former Governor of the Central Bank of Sri Lanka, delivered the key-note speech of the event. This veteran economist carries a strong reputation as an advisor to the Ministry of Finance and Planning regarding macroeconomic issues, making him a prominent figure in Sri Lankan politics. He explained the background and depth of the existing situation in the country as well as the potential escape routes from the situation. Dr. Travis Perera, senior management consultant and senior member of the Board of Study at the Postgraduate Institute of Management, also delivered a speech that included informative facts on possible entrepreneurship and business development ideas. He went on to say that in this difficult time, rather than looking back, we should look for new opportunities. Ch.QS. Lalantha Amarasekara, Director and General Manager at QSERVE, who has both quantity surveying and project management experiences in the UAE for more than a decade, shared his thoughts on the state of affairs in Sri Lanka while outlining the prevailing situation worldwide. Additionally, he discussed his thoughts on the employment prospects in other countries, particularly the Middle East. Renowned Architect Rohana Bandara Herath, Senior Vice President of the Sri Lanka Institute of Architects, added value to the Forum by delivering a speech about the challenges the construction industry is currently facing. He also offered his opinions on how to get out of the predicament. The Forum was expertly moderated by Ch. QS. Lalith Rathnayake, the immediate past president of the IQSSL. 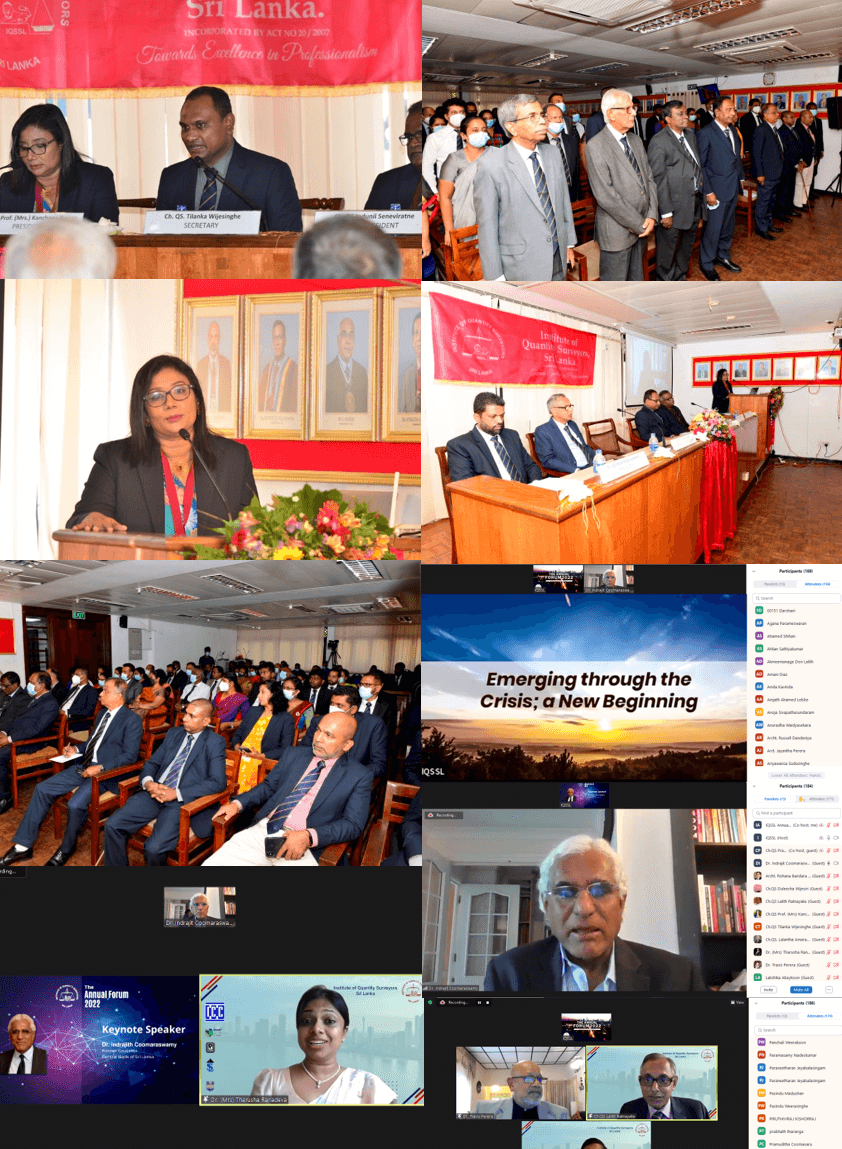